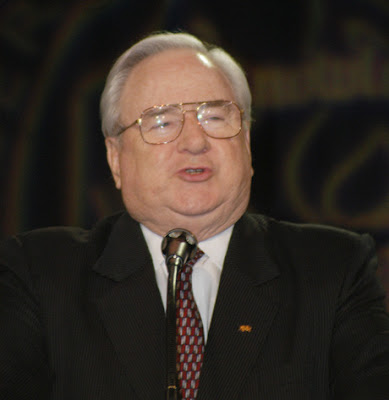 It seems that every newspaper is writing on the future of evangelical political activism after Falwell. The Washington Post printed its analysis this morning. I think that the New York Times analysis that I discussed earlier is a better article, but this is worth reading as well. Some highlights:

But John C. Green, a senior fellow at the nonpartisan Pew Forum on Religion and Public Life, said four factors combine to make this a time of flux on the religious right.

There is no single leader who stands astride the movement as Falwell once did. Nor has a 2008 presidential contender emerged to galvanize the ranks. A generation gap is emerging between younger and older evangelicals on subjects such as homosexuality. And a sometimes bitter debate is pitting evangelicals who want to keep their political activity tightly focused on a few issues, such as abortion and same-sex marriage, against those who want to embrace a broader agenda, including climate change and global poverty.

All these shifts present opportunities for younger leaders. But they also pose the possibility that the movement will become more fragmented.

"The evangelical movement as a political force is in a serious state of transition," Page said. "With the passing of Jerry Falwell, evangelicals are struggling to try to find the kind of cohesion he represented. That was going on even before he died."

The absence of a national evangelical political leader was masked in recent years by the presence of President Bush, who served as a rallying point. But the Rev. Richard Land, head of the Southern Baptists' Ethics and Religious Liberty Commission, said the only candidates in 2008 with wide appeal to evangelicals are ones, such as former governor Mike Huckabee (R-Ark.) and Sen. Sam Brownback (R-Kans.), who do not appear able to win.

Land noted that the leading Republican in the polls, former New York mayor Rudolph W. Giuliani, has been married three times and supports abortion rights. Sen. John McCain (R-Ariz.) has opposed a constitutional amendment to define marriage as the union of one man and one woman. Former Massachusetts governor Mitt Romney is a Mormon who adamantly supported legalized abortion in previous runs for office, though he has changed his position.

Faced with this field, some evangelicals have suggested that a Democratic victory might be a good thing. "If 2008 is a bad year for the Republican Party, there will be nothing like a liberal president to help that movement find its footing again," said Gary Bauer, president of the conservative group American Values.

Polls suggest that evangelicals under 30 are just as staunchly opposed to abortion, and almost as concerned about "moral standards" in general, as their elders. But a February Pew survey found that younger evangelicals are more likely than their parents to worry about environmental issues; 59 percent of those under 30 said the United States was "losing ground" on pollution, compared with 37 percent of those over 30.

Acceptance of homosexuality is also greater among young evangelicals. One in three under 30 favors same-sex marriage, compared with one in 10 of their elders.

Redeem the Vote, a group formed in 2004 to register young evangelicals to vote, is campaigning with black churches in Alabama for capping the interest charges on short-term "payday" loans, which can hit 400 percent a year. The group's founder, physician Randy Brinson, said he finds that young evangelicals are intensely interested in practical ways to help their communities and are little swayed by issues such as same-sex marriage.

"These kids have gone to school with people who happen to be gay, and they don't see them as a direct threat. They may think that lifestyle is wrong, but they don't see it as something that really affects their daily lives," Brinson said. "The groups that focus only on a narrow agenda, especially gay marriage and abortion, are going to decline."

All of these articles confirm what I believe--evangelicals are still quite conservative, but change is occurring and some Democratic candidates will be attractive to increasing numbers of evangelical voters--particularly when issues like gay rights and abortion are not front and center. What is particularly interesting is evidence that younger evangelicals do not share the views of older evangelicals on issues involving gays and lesbians. That one in three younger evangelicals support gay marriage is a stunning change.
Evangelicals Politics