Showing posts from October, 2008
Show all

October 30, 2008
Noted economist Justin Wolfers (who does very interesting workonthe economics of happiness) has a moving essay on gay marriage at Freakonomics:

It wasn’t meant to be political.

In fact, Saturday night, while beautiful, was pretty conventional: two of my dear friends from graduate school were getting married. They are fellow economists who have spent 18 years together; they have supported each other through their careers, each has followed the other to different cities, and they provide each other with support in their personal lives.

The only difference is that Jed and Eric are both men.
In many respects, their wedding followed the script I’ve celebrated as my other graduate school buddies have married. Friends and family were assembled, and the lucky couple were excited and busy hosts, making sure that all the details were in place.

But there were differences. The timing of their wedding had little to do with the progress of their relationship. It is pretty unusual for a couple to wait…
7 comments
Read more

October 28, 2008
David Brody is reporting that an independent expenditure group, Matthew 25, will be running a series of pro-Obama ads on Christian radio:

If you listen to Christian radio, get ready to hear Barack Obama talking about his Christian journey. And it's coming to a red state near you.

The Matthew 25 Network political action committee is coming out with new pro-Obama radio ads that highlight his Christianity. One of them is called, “Source of Hope.” You can listen to it here.

There will be two other radio ads as well on Christian radio including one from the pro-life conservative legal scholar Douglas Kmiec who defends Obama’s position on abortion. Listen to that one here. These radio ads will be on Christian music stations in the following states: Michigan, Colorado, Ohio, Missouri, Indiana, Virginia and North Carolina. Did you notice how many red states are in there?

October 22, 2008
What if Jesus ran for President? Here is the attack ad we would face. 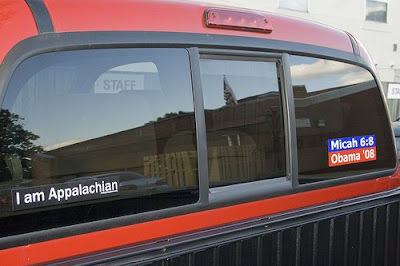 This is from Zach at JesusLand, who thinks it is the best campaign bumper sticker he has ever seen.


Micah 6:8 (NIV):
"He has showed you, O man, what is good. And what does the LORD require of you? To act justly and to love mercy and to walk humbly with your God."

I have given this some thought and have decided that theis bumper sticker, while funny, is also dangerous. I am pleased to see that Obama is getting support from the faithful--and for the right reasons--but such a direct linkage of faith with a particular politician should be as disturbing when done by the left as it is when done by the right. We should be praying that we are doing God's will--not proudly announcing to the world that a particular political position is what God wants. Theocracy by the left is as dangerous as theocracy by the right.
3 comments
Read more

October 09, 2008
David Brody of the Christian Broadcast network notes the recent Faith in Public Life poll showing that voters view Obama as friendlier to faith than McCain, and then offers his own observations about why this may actually be true:

The greatest shift in candidate preference between 2004 and 2008 has occurred among voters who attend religious services once or twice a month, moving from 49% support for…
2 comments
Read more

October 08, 2008
I have argued several times on this blog that it is time for politicians on both sides of the abortion debate to get serious about abortion reduction. (You can find all of these posts collected here. Steve Waldman of Beliefnet has a very interesting essay that argues that a serious effort to reduce abortion would likely do more than efforts to overrule Roe v. Wade:

. . . When Democrats refer to an "abortion reduction strategy" they mostly mean efforts that keep abortion legal but help prevent pregnancy through family planning and/or making it easier for women who do get pregnant to carry the baby to term. (A few examples: Matthew 25 …
1 comment
Read more

The Twelve Tribes of Politics

Steve Waldman of Beliefnet.com and University of Akron's John Green offer their latest "12 Tribes" analysis of politics, which focuses on the political beliefs of twelve different categories of religious belief and practice:

Moral issues are dramatically less important this year than in previous years – even among the most religiously observant voters, according to the 2008
edition of the Twelve Tribes of American Politics.

The Twelve Tribes were introduced in 2004 as a collaboration between Beliefnet and John Green of the Bliss Institute at University of Akron, based on the National Surveys of Religion and Politics. The premise: most political reporting acted as if there were two groups – the Religious Right and Everyone Else. So we crafted a new set of groupings, inspired by the twelve tribes of Biblical Israel, but formed
around similari…
Post a Comment
Read more
More posts