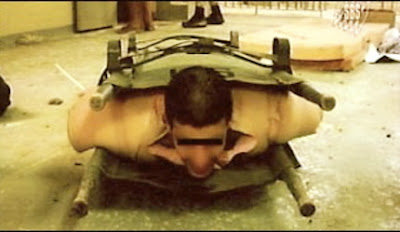 I was the General Counsel of the United States Army for two years. Two of my colleagues from the Army (including a lawyer who worked for me) died in the September 11, 2001 attack on the Pentagon. My pain that day was not just the shared pain felt by nearly every American. It was personal and it was very real.

Yet, I am stunned, and a bit puzzled, at the fact that nearly all of the Republican candidates for President are enthusiastically supporting "enhanced interrogation techniques" as a tool in the War on Terror. The major exception, of course, being John McCain, who is the only candidate to have suffered torture. Two candidates, Giuliani and Romney, announced that they intend to withdraw the U.S. from the U.N. Convention against torture!

Has the Republican Party become the Pro-torture party?

For decades, it was the official position of the U.S. Government that torture (defined to include the techniques approved by the current Administration) was counter-productive, wrong, and a violation of both domestic and international law. I think that the case against torture was well made by General Petraeus in the letter that I wrote about in this post:

Some may argue that we would be more effective if we sanctioned torture or other expedient methods to obtain information from the enemy. They would be wrong. Beyond the basic fact that such actions are illegal, history shows that they also are frequently neither useful nor necessary. Certainly, extreme physical action can make someone “talk”; however, what the individual says may be of questionable value. In fact our experience in applying the interrogation standards laid out in the Army Field Manual (2-22.3) on Human Intelligence Collector Operations that was published last year shows that the techniques in the manual work effectively and humanely in eliciting information from detainees.

We are, indeed, warriors. We train to kill our enemies. We are engaged in combat, we must pursue the enemy relentlessly, and we must be violent at times. What sets us apart from our enemies in this fight, however, is how we behave. In everything we do, we must observe the standards and values that dictate that we treat noncombatants and detainees with dignity and respect.

What was especially surprising to me is that the greatest enthusiasm for torture seemed to come from those who most emphasis their faith--Brownback and Huckelbee. How one can defend torture as consistent with Christian ethics is beyond me.

I think this Washington Post editorial is right on:

THE REPUBLICAN presidential candidates were asked at their debate in South Carolina on Tuesday about "a million-to-one scenario" involving the interrogation of suspected foreign terrorists. Only one in 10 got it right.

That one would be Sen. John McCain (Ariz.), the only presidential candidate who has experienced torture. "Torture" is Mr. McCain's correct description of the "enhanced interrogation techniques" that President Bush authorized the CIA to use on captured members of al-Qaeda -- methods that soon spread to the military prison at Guantanamo Bay, and then to Afghanistan and Iraq. Until Mr. McCain succeeded in passing a legislative restriction two years ago, the methods included "waterboarding," or simulated drowning, an ancient torture technique that every U.S. government before the Bush administration considered illegal and immoral.

The scenario posited by questioner Brit Hume supposed that, after suicide attacks in several U.S. cities, a group of attackers believed to know about further strikes was captured off the coast of Florida and taken to Guantanamo. "How aggressively would you interrogate . . . ?" Mr. Hume asked. Mr. McCain answered that in that extreme and most unlikely situation, "I, as the president of the United States, would take that responsibility" for determining interrogation methods. But, he added, "We could never gain as much from that torture as we lose in world opinion."

The senator's words carried the weight not only of his own experience but that of the Bush administration, which has all but destroyed U.S. standing in many parts of the world because of the human rights abuses at Guantanamo, at Iraq's Abu Ghraib and in the CIA's secret prisons. Yet Mr. McCain's rivals seem to have learned nothing from this history. Rudy Giuliani said he would tell interrogators to use "every method they could think of," including waterboarding. Nonsensically, he added, "I've seen what can happen when you make a mistake about this," though prisoner interrogations had nothing to do with the attacks of Sept. 11, 2001.

Mitt Romney, noting that "some people" have said we ought to close Guantanamo, boasted that "we ought to double Guantanamo," presumably doubling the international damage. He added that he liked to have suspects in Guantanamo because "they don't get the access to lawyers they get when they're on our soil." In fact, even President Bush has said he'd like to close Guantanamo; and his administration recently retreated from an attempt to curtail lawyers' access to the Guantanamo prisoners.

Does Mr. Romney think the president has gone soft on terrorism? More likely, he and most of the other GOP candidates are calculating that they can curry favor with voters by promising that torture will be a tool of their presidential administrations. Let's hope they are wrong. As Mr. McCain put it, "It's not about the terrorists, it's about us. It's about what kind of country we are."

One final thought: Until this war, it was generally the case that it was our soldiers that faced the prospect of torture at the hands of the enemy. It was our Government that reminded the enemy of the obligations under the Geneva Convention. Do you have any doubt in your mind that we would have objected had our soldiers been subjected to "enhanced interrogation techniques" such as water boarding?

And do you have any doubt that sometime in the near future some unfortunate soldier in some distant war will regret the day that his Government informed the world that waterboarding is not torture?
Politics Torture

Unknown said…
Chuck, people again seem to be leaving out comments by Ron Paul, a Republican candidate who is both against the war and against torture. He wrote a piece for LewRockwell.com back in 1994. Here's a quote from it:

"Legal issues aside, the American people and government should never abide the use of torture by our military or intelligence agencies. A decent society never accepts or justifies torture. It dehumanizes both torturer and victim, yet seldom produces reliable intelligence. Torture by rogue American troops or agents puts all Americans at risk, especially our rank-and-file soldiers stationed in dozens of dangerous places around the globe."

I've heard a lot of news people, especially on Fox News, gloss over a lot of this, as they seem to be focusing on their own self-labeled "front-runner" candidates while openly saying that the so-called "second-tier" Republican candidates are only useful for occasionally jabbing those the media considers to be viable contenders.

I find it refreshing that we are seeing hard, unwavering opposition to the war in all of its disgusting manifestations coming from both Republicans and Democrats.
May 17, 2007 at 10:12 PM

Actually, lately the GOP establishment seems to be in all out attack mode on Ron Paul. His comments on Tuesday seem to have struck a nerve.
May 18, 2007 at 9:04 AM