More on the History of the Christian Right Political Movement 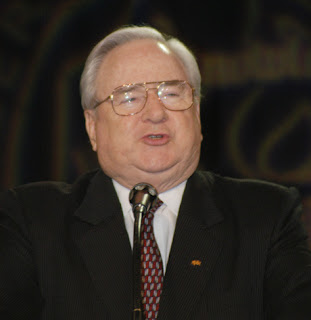 I previously did a post on the history of the Christian right political movement that noted that abortion had little to do with the rise of this movement. Max Blumenthal of the Nation has an article that adds more detail to the story:

But for Falwell, the "questions of the day" did not always relate to abortion and homosexuality--nor did they begin there. Decades before the forces that now make up the Christian right declared their culture war, Falwell was a rabid segregationist who railed against the civil rights movement from the pulpit of the abandoned backwater bottling plant he converted into Thomas Road Baptist Church. This opening episode of Falwell's life, studiously overlooked by his friends, naïvely unacknowledged by many of his chroniclers, and puzzlingly and glaringly omitted in the obituaries of the Washington Post and New York Times, is essential to understanding his historical significance in galvanizing the Christian right. Indeed, it was race--not abortion or the attendant suite of so-called "values" issues--that propelled Falwell and his evangelical allies into political activism.

"If Chief Justice Warren and his associates had known God's word and had desired to do the Lord's will, I am quite confident that the 1954 decision would never have been made," Falwell boomed from above his congregation in Lynchburg. "The facilities should be separate. When God has drawn a line of distinction, we should not attempt to cross that line."

Falwell's jeremiad continued: "The true Negro does not want integration.... He realizes his potential is far better among his own race." Falwell went on to announce that integration "will destroy our race eventually. In one northern city," he warned, "a pastor friend of mine tells me that a couple of opposite race live next door to his church as man and wife."

In a recent interview broadcast on CNN the day of his death, Falwell offered his version of the Christian right's genesis: "We were simply driven into the process by Roe v. Wade and earlier than that, the expulsion of God from the public square." But his account was fuzzy revisionism at best. By 1973, when the Supreme Court ruled on Roe, the antiabortion movement was almost exclusively Catholic. While various Catholic cardinals condemned the Court's ruling, W.A. Criswell, the fundamentalist former president of America's largest Protestant denomination, the Southern Baptist Convention, casually endorsed it. (Falwell, an independent Baptist for forty years, joined the SBC in 1996.) "I have always felt that it was only after a child was born and had a life separate from its mother that it became an individual person," Criswell exclaimed, "and it has always, therefore, seemed to me that what is best for the mother and for the future should be allowed." A year before Roe, the SBC had resolved to press for legislation allowing for abortion in limited cases.

While abortion clinics sprung up across the United States during the early 1970s, evangelicals did little. No pastors invoked the Dred Scott decision to undermine the legal justification for abortion. There were no clinic blockades, no passionate cries to liberate the "pre-born." For Falwell and his allies, the true impetus for political action came when the Supreme Court ruled in Green v. Connally to revoke the tax-exempt status of racially discriminatory private schools in 1971. At about the same time, the Internal Revenue Service moved to revoke the tax-exempt status of Bob Jones University, which forbade interracial dating. (Blacks were denied entry until 1971.) Falwell was furious, complaining, "In some states it's easier to open a massage parlor than to open a Christian school."

Seeking to capitalize on mounting evangelical discontent, a right-wing Washington operative and anti-Vatican II Catholic named Paul Weyrich took a series of trips down South to meet with Falwell and other evangelical leaders. Weyrich hoped to produce a well-funded evangelical lobbying outfit that could lend grassroots muscle to the top-heavy Republican Party and effectively mobilize the vanquished forces of massive resistance into a new political bloc. In discussions with Falwell, Weyrich cited various social ills that necessitated evangelical involvement in politics, particularly abortion, school prayer and the rise of feminism. His pleas initially fell on deaf ears.

"I was trying to get those people interested in those issues and I utterly failed," Weyrich recalled in an interview in the early 1990s. "What changed their mind was Jimmy Carter's intervention against the Christian schools, trying to deny them tax-exempt status on the basis of so-called de facto segregation."

In 1979, at Weyrich's behest, Falwell founded a group that he called the Moral Majority. Along with a vanguard of evangelical icons including D. James Kennedy, Pat Robertson and Tim LaHaye, Falwell's organization hoisted the banner of the "pro-family" movement, declaring war on abortion and homosexuality. But were it not for the federal government's attempts to enable little black boys and black girls to go to school with little white boys and white girls, the Christian right's culture war would likely never have come into being. "The Religious New Right did not start because of a concern about abortion," former Falwell ally Ed Dobson told author Randall Balmer in 1990. "I sat in the non-smoke-filled back room with the Moral Majority, and I frankly do not remember abortion ever being mentioned as a reason why we ought to do something."

Read it all.
Evangelicals History Politics