Another General Speaks Out Against Torture 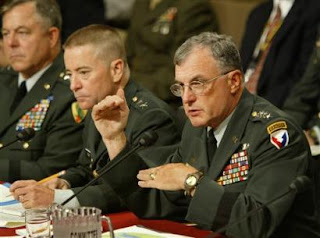 When I was General Counsel of the United States Army, I had the honor to work with lots of very impressive General officers. Paul Kern was one of the best. He played a very important role in pushing the Army toward a badly needed transformation. General Kern later played another very important role. He was the investigator of the atrocities at Abu Ghraib prison.

Today he had a letter to the editor in the Washington Post yesterday that makes a very strong case that torture is not merely morally wrong, but also very unwise:

As the investigator of the atrocities at Abu Ghraib prison, I confronted the outcome of current interrogation policies. We undermine the values that built this country and the credibility of our armed forces when we stoop to the level of some of our enemies. The awful events at Abu Ghraib and their far-reaching consequences could have been prevented if we had adhered to the Geneva Conventions.

The policies that were implemented for detainees at Guantanamo Bay, Cuba, and then revoked found their way into headquarters in Iraq and Afghanistan, where the staffs were contemplating draft policies. When no official direction was given, the interrogators referred to their experience in other situations, such as Guantanamo, or to the drafts they had seen. They acknowledged that they understood the Geneva Conventions and their Army training on this matter, but the pressure to uncover intelligence led them to the "new procedures."

I support the conclusion of Gens. Krulak and Hoar: "The rules must be firm and absolute; if torture is broached as a possibility, it will become a reality."

Captured U.S. service members will face increased risk if torture becomes a tool of our interrogators. Our research showed that torture may produce an answer but that the credibility of the answer will always be in doubt. When our service members become captives, we could pay a high price for questionable intelligence that we extracted through torture.

For all of my posts on Torture, click here.
Military Politics Torture