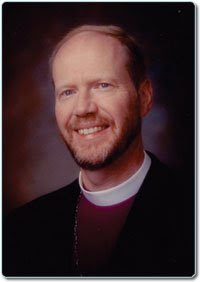 On Tuesday I picked up some old friends at the airport. They were all members of the "Baby Bishop's School" class that I had attended right after I was consecrated. We had bonded so well that when the formal instruction was over, we decided to keep meeting on our own for mutual support and learning. Just before I picked them up, I received an email from London informing me that the Archbishop of Canterbury had invited me to the Lambeth Conference of 2008. One of the bishops I met at the airport, Gene Robinson of New Hampshire , had just been informed that he was not invited.


Of the over 800 Anglican bishops, only two were excluded. The other was Martyn Minns, a former Episcopal priest of the Diocese of Virginia ordained by Archbishop Akinola of Nigeria to serve as a missionary bishop of the Convocation of Anglicans in North America (CANA). The two men could hardly be more different. Bishop Robinson was duly elected and consecrated according to the Canons and Constitution of the Episcopal Church. Bishop Minns was irregularly consecrated as a protest against policies of the Episcopal Church. As we all know by now, Bishop Robinson is a gay man in a long-term partnered relationship. Bishop Minns in contrast was ordained by a bishop who believes that Gay and Lesbian people should be imprisoned.
In his letter of invitation Archbishop Williams writes:

"At this point, and with the recommendations of the Windsor Report particularly in mind, I have to reserve the right to withhold or withdraw invitation from bishops, whose appointment, actions, or manner of life have caused exceptionally serious division or scandal within the Communion [and] who are generally seen as fundamentally compromising the efforts towards credible and cohesive resolution."

Certainly the Archbishop is within his rights to invite whomever he pleases. However, I cannot help but express my dismay that he would treat these men in the same way. Whatever you may think of Bishop Robinson, I do not believe that his manner of life has caused division or scandal in the communion, rather it is the actions of those who have used his ordination in an intentional effort to divide both our own Episcopal Church and the Anglican Communion who are responsible.

Bishop Robinson's participation at the Lambeth Conference might be awkward for some of the other participants, but that is hardly new. There are plenty of bishops whom I have a hard time working with, and doubtless they feel the same about me. But I can tell you from my own relationship with Bishop Robinson that he has been exemplary in maintaining an honest and open attitude of trust within his own Diocese, and in the House of Bishops, he as worked tirelessly to be an agent of reconciliation and resolution.

That is not the case with Bishop Minns and his supporters. He has been aided in his efforts to divide the American church by African bishops who have crossed jurisdictional lines in open disregard of the most ancient canons of the church, but also in violation of the Windsor Report itself. They have attempted to steal the rightfully owned buildings and property of Episcopal Congregations in Virginia and elsewhere and have caused untold hardship and division to faithful parishioners.

It also seems to me remarkably odd that the Anglican Communion, which has pledged itself to a "listening process" of the experience of Gay and Lesbian Christians, should exclude from that process one of its leading witnesses.

Although I am deeply disappointed by the Archbishop's decision and grieve personally for my friend, it is important that none of us, whatever one's perspective, respond in a reactive way to this news, which can only foster further division. I plan to follow the advice of our own Presiding Bishop who counsels "a calm approach," and who reminds us that "aspects of this matter may change in the next 14 months, and the House of Bishops' meeting offers us a forum for further discussion." I look forward to that meeting when the Archbishop will be with us.

I would continue to ask your prayers for the Bishop Robinson, for the leaders of our church and of the Communion, and for all of us, that we might be faithful to Christ's vision that "we might all be one."