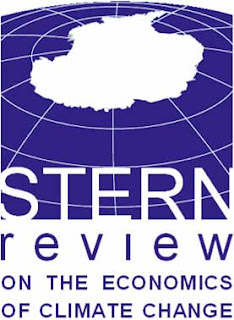 There is an outstanding new Catholic group blog that focuses on the interplay between Catholic theology and social policy. It is well worth reading--even when you disagree. I read it every day. Today's post on the economics of climate change is a good example of the careful analysis found in every post I have read so far:

As soon as you enter a debate on the topic of global warming, your interlocutor will sooner or later accuse you of proposing policy actions that could have devastating consequences, especially for the poorest and most vulnerable. It's time, I think, to address this criticism head on with a modicum of vigor. In this, there's no better starting point than the UK-treasury mandated Stern Review, tasked with considering the costs and benefits of policy actions geared toward reducing greenhouse gas emissions.

The bottom line of the report is pellucid. By not acting, the costs of climate change will eat up 5 percent of global GDP each year, which could rise to 20 percent, taking into account a wider range of risks. In contrast, the cost of reducing greenhouse gas emissions would amount to 1 percent of global GDP a year. The major economic costs go far beyond the inconvenience to the American lifestyle of high gas prices, as "hundreds of millions of people could suffer hunger, water shortages, and coastal flooding". The most vulnerable, the poorest countries, will suffer "earliest and most", even though they are least responsible for global warming. Moreover, the next 10-20 years will prove absolutely crucial, rendering little time for complacency. And remember, the latest evidence from climatologists in Science is that climate models may actually be understating the rate of global warming, and that the assumptions of the Intergovernmental Panel on Climate Change are actually too conservative. Clearly, the benefits of decisive early action outweigh the costs.

Now, these results are not uncontroversial. In particular, the discounting assumptions have been heavily criticized in some quarters. It is customary in these exercises to discount the future simply because it is the future-- attaching less weight to the welfare of tomorrow than today (this is known as the rate of pure time preference). Stern rejects this methodology on ethical grounds. Hence his estimates of the damage caused by global warming are larger, simply because his discount rate is so much smaller.

Clearly, should these scenarios come to fruition, this could be one of the most pressing moral issues of the day. There is certainly much to like in analysis of the Stern Review from a Catholic perspective. For a start, the discounting assumptions are surely worthy of support, given that they do not fall into the utilitarian trap of assuming our lives are worth more than the lives of those not yet born. And indeed, Holy See observer to the United Nations, Archbishop Celestino Migliore, echoed the Stern Review when he noted that global warming will impose a disproportionate burden on "the poorest and weakest who, even if they are among the least responsible for global warming, are the most vulnerable because they have limited resources or live in areas at greater risk." He called for a shift from the "heedless pursuit of economic growth" toward an approach more respectful of Creation.

And yet many on the American right continue to stand stubbornly against all proposals to combat global warming. The reasons are manifold, ranging from bad evangelical theology-- the right to dominate the earth, the idea that God wants Americans to be wealthy, the immanence of the end times, an anti-intellectual streak-- to crasser materialism, and a tendency to heavily discount the future (just look at the low savings rates!). No, there is no certainty that the scenarios painted by the Stern review will materialize, but do we need certainly before being willing to make some modest sacrifices?

The decision on discounting depends on two factors: first, how to take into account the fact that people are likely to be richer in the future; and second, whether the future should be discounted simply because it is the future.

We discount in the standard way to allow the possibility that people will have higher consumption in the future. Climate change implies that strongly divergent paths for future growth are possible. The use of a single set of discount rates for all paths is inappropriate when looking at non-marginal changes.

The degree of discounting depends on attitudes to income distribution, which are captured by the elasticity of the marginal utility of consumption. We use an elasticity of one, in line with some empirical estimates. For this case, the contribution to the discount rate is equal to the rate of growth of consumption of the path. This reflects an assumption that society is moderately averse to income inequality and therefore is more worried about adverse impacts that fall on poorer generations. If society were more strongly averse to income inequality, it would be appropriate to use a higher multiple of the average growth rate.

In addition, we carefully examine the case for discounting the future just because it is the future – which in economic terms is known as pure time preference. This requires a consideration of the ethical issues involved in comparing the incidence of costs and benefits between generations, some of which are distant in time. We argue – in line with economists including Ramsey, Sen, Pigou and Solow – that the welfare of future generations should be treated on a par with our own. This means that the only justification for a positive rate of pure time preference in assessing the impacts of climate change is the possibility that the human race may be extinguished. As the possibility of this happening is low, we assume a low rate of pure time preference, 0.1%, which corresponds with a 90% probability of humanity surviving a 100-year period. Higher probabilities of survival would imply a still lower rate. There are other approaches to pure time discounting and references are given in the Review (Chapter 2 and the appendix) and in the “Modelling Paper” on www.sternreview.org.uk.

The average discount rate used in the modelling exercise is then the combination of these two elements: the average growth rate over the relevant time horizon for the particular path being examined (in the case where the elasticity of the marginal utility of consumption is one), plus the 0.1% pure rate of time preference.

Many previous studies have used higher rates of pure time preference, which are similar to those used for evaluating other kinds of investments. However, we argue that this disinvestment in the environment cannot be considered in, say, the same way as an economist would consider an investment in a railway. A railway can be replaced or redesigned, it can become obsolete or redundant. In other words, the probability of survival depends on the context. In this case the context is that of the whole planet.

And, for what its worth, Berkeley economist Brad Long supports this view as well.
Climate Change