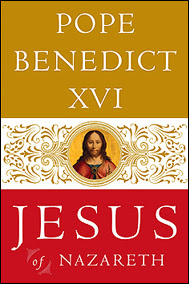 J. Peter Pham, director of the Nelson Institute for International and Public Affairs at James Madison University in Virginia, has a very interesting review of Pope Benedict XVI's Jesus of Nazareth. The entire review is well worth a close read, but here are some highlights:

As JESUS OF NAZARETH unfolds, it is clear that its author has little patience for popular modern Christologies portraying Jesus as wise teacher on a par with the founders of other religious or philosophical movements, or as a preacher of tolerance and understanding, or even as a political revolutionary. No wonder the Congregation for the Doctrine of the Faith under Cardinal Ratzinger investigated the Christological writings of Jesuit theologians Jacques Dupuis and Roger Haight and more recently issued a warning about those of another Jesuit, Jon Sobrino, who in its view transgressed into those respective faulty understandings. (In the interest of full disclosure, I was a student of Dupuis, whose official defender during Ratzinger's intervention, Gerard O'Collins, directed the dissertation for my theological doctorate.) For Benedict, however, the flaw with all these interpretations is that, no matter how well-intentioned, they end up detracting from the truth that "in the end, man needs just one thing, in which everything else is included," God, the source of objective, absolute truth beyond the ephemeral interests and fancies of humankind.

Thus, in his exegesis of Jesus' temptations in the desert when he was called upon to "command this stone to become bread" (Luke 4:3), Benedict admits, "Is there anything more tragic, is there anything more opposed to belief in the existence of a good God and a Redeemer of mankind, than world hunger?" In answer to his own query, he quotes the German Jesuit priest Alfred Delp, who was executed by the Nazis for his work with the German resistance: "Bread is important, freedom is more important, but most important of all is unbroken fidelity and faithful adoration." Benedict then proceeds to draw out the practical implications of this theological perspective on feeding the world today:

The aid offered by the West to developing countries has been purely technically and materially based, and not only has left God out of the picture, but has driven men away from God. And this aid, proudly claiming to "know better," is itself what first turned the "third world" into what we mean today by that term. It has thrust aside indigenous religious, ethical, and social structures and filled the resulting vacuum with its technocratic mind-set. The idea was that we could turn our stones into bread; instead, our "aid" has only given stones in place of bread. The issue is the primacy of God. The issue is acknowledging the he is a reality, that he is the reality without which nothing else can be good. History cannot be detached from God and then run smoothly on purely material lines.


The limitations of international development assistance are nowadays well known: witness the devastating critique by William Easterly, the subtitle of whose most recent book THE WHITE MAN'S BURDEN (Penguin, 2006) was "Why the West's Efforts to Aid the Rest Have Done So Much Ill and So Little Good." What is characteristic of Benedict is his emphasis, echoing his repeated calls for postmodern Europe to recover its Christian roots, that in this world "we are obliged to resist the delusions of false philosophies and to recognize that we do not live by bread alone, but first and foremost by obedience to God's word." Only when this obedience is put into practice, Benedict insists, will "the attitude develop that is also capable of providing bread for all." Thus the reason for the pontiff's emphasis on Christology (and its role as the hermeneutical key to his own "fragmentary and unfinished" theological corpus):

What did Jesus actually bring, if not world peace, universal prosperity, and a better world? ...He brought God, and now we know his face, now we can call upon him. Now we know the path that we human beings have to take in this world. Jesus has brought God and with God the truth about our origin and destiny: faith, hope, and love.

For those of us who care deeply about world poverty, this is an important reminder. In our zeal to feed the world's poor, we must take care that we not turn the Church into nothing more than a social service agency. It is far more. And it is the message of Jesus Christ (the spiritual food) that, in turn, will drive our efforts to remember the least of these.
Books Pope Theology