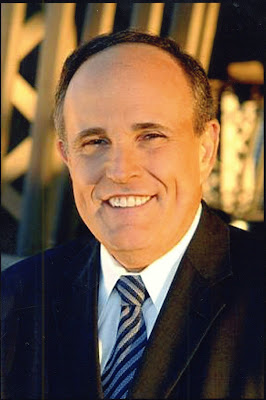 Michael Gerson, a former Bush speechwriter, has an op-ed in the Washington Post that argues that Giuliani's position on abortion is an illogical muddle. I am no fan of Giuliani. Indeed, he ranks rather low on my list of Republican candidates for President for a variety of reason. Nonetheless, I think Gerson's challenge is unfair.

Here is what Gerson has to say:

There is, however, a question that comes before politics: Does Giuliani's position on abortion actually make sense?

In early debates and statements, he has set out his views on this topic with all the order and symmetry of a freeway pileup. His argument comes down to this: "I hate abortion," which is "morally wrong." But "people ultimately have to make that choice. If a woman chooses that, that's her choice, not mine. That's her morality, not mine."

This is a variant of the position developed by New York Gov. Mario Cuomo in 1985. In this view, the Catholic Church's belief in the immorality of abortion is correct, in the same sense that its belief in the Immaculate Conception is correct. Both beliefs are religious, private and should not be enforced by government.

But the question naturally arises: Why does Giuliani "hate" abortion? No one feels moral outrage about an appendectomy. Clearly he is implying his support for the Catholic belief that an innocent life is being taken. And here the problems begin.

How can the violation of a fundamental human right be viewed as a private matter? Not everything that is viewed as immoral should be illegal; there are no compelling public reasons to restrict adultery, for example, or to outlaw sodomy. But when morality demands respect for the rights of a human being, those protections become a matter of social justice, not just personal or religious preference.

American history has tested these arguments. In debating the Missouri Compromise, Sen. Stephen Douglas said of slavery: "I am now speaking of rights under the Constitution and not of moral or religious rights. I do not discuss the morals of the people of Missouri, but let them settle that matter for themselves." Abraham Lincoln differed: If faith and conscience tell us that enslaved Americans are men and brothers, then slavery must eventually be ended. Passing the 13th Amendment was not "imposing" our moral views on slaveholders; it was upholding the meaning of law and justice.

Giuliani's doctrine of individual sovereignty goes much further than did Douglas, logically preventing even states from restricting abortion. And this raises a question about Giuliani's view of the law itself: Can it be a right to violate the basic rights of others? Given American opinion, progress toward the protection of unborn life is likely to be incremental and partial. It would be foolish to prosecute women who have abortions -- and the law struck down in Roe v. Wade did nothing of the kind. But recognizing these limits and realities is different from asserting that the law should have nothing to do with the defense of the weak.

A number of pro-choice positions can be held consistently. It is possible to believe that human worth develops gradually and that the early fetus is merely a clump of cells. It is possible to accept professor Peter Singer's teaching that human worth arrives only with self-conscious rationality, opening up disturbing new possibilities of infanticide.

But Giuliani has chosen an option that is not an option -- a belief that unborn life deserves our sympathy but does not deserve rights or justice. This view is likely to dog him in the primary process, not only because it is pro-choice but because it is incoherent.

As I discussed in an earlier post, it is entirely possible to believe that abortion is almost always a tragic choice and a moral wrong, but also believe that criminalizing abortions is not a wise, effective or even politicaly feasible policy option. And according to Father Thomas J. Reese, S.J. this is consistent with Catholic teaching: "Many canon lawyers and moralists believe that a politician could be against abortions and still oppose criminalizing it for prudential reasons, for example, because he believes such laws would be unenforceable, divisive and politically unrealistic."

A pro-choice position on abortion need not be rested solely on a philosophical position that this is a personal or religious choice. It can also rest on the position that criminalizing abortion--particularly in our pluralistic society--will not stop abortions, and will be divisive, ineffective, and ultimately deadly. Four million abortions, most of them illegal, take place in Latin America annually, and up to 5,000 women are believed to die each year from complications from abortions. In contrast, in the United States, where abortion is legal, the abortion rate is declining, is below that of Latin America, and few women die from complications from abortion.

And as evidenced by the facts presented in this post from earlier today, there is a strong link between abortion rates and poverty. I do not think that it is an accident that abortion rates in all of Western Europe are well below those in the United States--among other factors, surely the richer social net for women and children in these countries plays an important part.

healtheland said…
"Because a law against abortions will not stop all abortions, abortion should remain legal." Excuse me, but what other issues do we apply this to? Laws against rape, theft, and murder? Civil rights laws? Environmental laws? Drug laws? People only use the "unenforceable" canard when they really want something to be legal without admitting it. Look, the overwhelming majority of rapes are never reported, rape shield laws and media policies give prosecutors an advantage that they do not have in other cases, a great many are "he said she said" incidents with no real evidence, more still are cases where the victim acknowledges at some point implying or giving consent at some point only to withdraw it later, juries are far less likely to bring convictions against married men and in cases involving underclass or minority women, and a bunch of other murky situations that result in a lot of miscarriages of justice, with a high number of both outrageous acquittals and wrongful convictions. So, are we going stop enforcing and prosecuting rape statutes? Of course not. Why? Because everyone agrees that rape is immoral, clear a violation of the rights of a person AND society, even in very difficult cases such as that of a married woman that withdraws consent from her husband during sex. Thus, I state that a lot of the people who claim to believe that abortion is "morally wrong" really do not believe it to be so, and the primary suspects for such false claimers are people aspiring to political office who oppose all restrictions on the procedure. If it is so "immoral", why do so many of these people vehemently oppose laws that would require minors to notify their parents before they commit such an act of great immorality? And I would be curious to see the statements of European politicians on this issue. Do any of them claim to find abortion so immoral? Of course not. Why? Because Europe is so much more immoral than America? No, but because opposing abortion is politically and legally untenable in Europe, there is no viable opposition, and as such there is no reason for anyone to try to placate anyone by maintaining any sort of pretense. I sincerely wish that their American counterparts would follow after the Europeans and cease to pretend that they find anything immoral or abhorrent about abortion.
May 23, 2007 at 8:07 AM

Thanks for visiting my blog, and commenting. Your point is a fair one, except that the analogy to rape, theft, and murder laws breaks done due to the simple fact that the American public is so sharply divided on the issue of abortion. A majority of Americans appear to oppose criminal sanctions for abortion, and this makes the use of the traditional pro-life approach a really unviable option. And the experience in this country before 1973 (and the experience in Latin America) suggests that abortions will continue and the number of maternal deaths will increase if we outlaw abortion.

Does this mean we do nothing? Of course not. I hope to blog on what will work to reduce abortions, but a few logical policy choices come to mind. First, the European experience shows that ready access to contraception reduces abortion. Second, the European experience (and the American data) suggest that financial support for women and children will reduce abortions. And, support for adoption, will give women who do not want to keep their babies a viable option.
May 23, 2007 at 9:48 AM