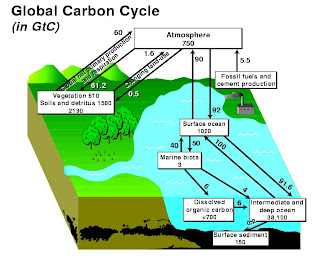 More evidence that our climate change models may be underestimating the problem. The Los Angeles Times reports:

The Southern Ocean, a massive storehouse for carbon dioxide from the atmosphere, is slowly losing its capacity to buffer the world from rising concentrations of the greenhouse gas, researchers reported Thursday.

As a result, the study said, carbon dioxide could accumulate in the atmosphere faster than expected over the coming decades.

The ocean, which surrounds Antarctica, accounts for about a third of all carbon stored in the world's five oceans.

The researchers described a vicious cycle in which global warming reduced the ocean's ability to absorb the heat-trapping gas. That would then accelerate the accumulation of carbon dioxide in the atmosphere, triggering more warming.

"The buffer doesn't seem to be kicking in as one might expect," said Ralph Keeling, a geochemist at the Scripps Institution of Oceanography in La Jolla, who was not involved in the study.

The findings are controversial. Pieter Tans, a senior scientist at the National Oceanic and Atmospheric Administration in Boulder, Colo., said the measurements of carbon dioxide changes were so subtle that they could easily be sampling errors.

"I think they make a good case, but I am not entirely convinced," he said, adding that there is little evidence that the planet's ability to absorb carbon is fading.

The new study, published in the journal Science, focused on the Southern Ocean because it is extremely isolated. With only barren, ice-covered land nearby, the researchers could rule out interference from vegetation.They analyzed data from 11 monitoring stations in the Southern Ocean that measured carbon dioxide concentration just above the surface. The data covered 1981 to 2004.

The researchers compared the results to computer predictions of what the ocean should have absorbed given the rising atmospheric carbon dioxide levels. In 2004, the net absorption should have been 0.5 billion metric tons, the study said.

Read it all.
Climate Change