Ruth Marcus on Democrats and Faith 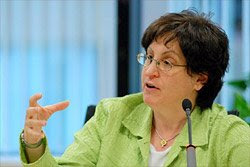 Ruth Marcus of the Washington Post was a friend in law school, and she has some observations to make about the Democratic Presidential candidates new faith initiative:

This is not Michael Dukakis's Democratic Party. Instead, as was shown by Monday night's forum on faith, sponsored by CNN and the liberal evangelical group Sojourners, it is a party on a mission: to make inroads into Republicans' ability to attract and, more important, turn out religious voters.

"The biggest thing is that it happened," Mara Vanderslice, a Democratic consultant who headed John Kerry's 2004 efforts to connect with religious voters, said of the event. "Think how far we've come from just a couple of years ago, when Republicans claimed religion and religious Americans."

The Democrats have been working on their religion problem for several years, sometimes with more clunkiness than conviction: Think Howard Dean in 2004 offering up Job as his favorite book in the New Testament. Yet with the exception of Bill Clinton, the party's presidential candidates since born-again Jimmy Carter have not been particularly comfortable in religious settings or, even more, talking about religion.

For the 2008 campaign, the Democrats have the advantage of -- you might say they are blessed with -- three front-running candidates for whom religion isn't a matter of conversion on the road to Des Moines.

"I come from a tradition that is perhaps a little too suspicious of people who wear their faith on their sleeves," Hillary Clinton told the crowd at George Washington University, invoking her Sunday school lessons about the Pharisees' ostentatious religiosity. But it is impossible to understand Clinton without going back to her roots in the Methodist Youth Fellowship and the abiding influence of that teaching.

Edwards, raised a Southern Baptist and now a Methodist, is the most disposed to explicitly religious language, and to connect that with his antipoverty agenda. "We are all sinners," Edwards said in response to a question about his biggest sin. "We all fall short, which is why we have to ask for forgiveness from the Lord."

Obama, a member of the United Church of Christ, was the most restrained -- perhaps because of the questions he was asked, perhaps because he chose to filibuster through his allotted 15 minutes. This diffidence was odd, since he wrote movingly in his autobiography about his spiritual awakening and, at last year's Sojourners' conference, spoke passionately on the role of faith in public life.

In the 2008 campaign, said David Kuo, former deputy director of the White House Office of Faith-Based Initiatives, it's the Democratic candidates who sound like evangelicals, and the Republicans -- Mitt Romney, Rudy Giuliani and John McCain -- who sound like secularists.

"There's this great irony that the Democrats have learned Bush's lesson on faith this time around better than the Republicans," Kuo said. "You've got Romney terrified of talking about his faith, Giuliani who wants to talk about religion even less than Romney does and McCain, who comes from a generation of public reticence in talking about his faith."

The University of Akron's John C. Green, an expert on religion and politics, said that while Republicans in 2006 mostly kept their hold on evangelical voters, Democrats were more successful in peeling off white Catholics, who went 54 percent to 45 percent for the GOP in 2004 and 50-49 Democratic last year.

Indeed, Democrats' best hopes for 2008 and beyond may not be in mobilizing a "religious left," which will inevitably be smaller than its conservative counterpart -- Kuo calls it a "corner grocery" to the right's "Wal-Mart." Rather, the Democrats could make inroads by luring moderate evangelicals and Catholics who once voted Democratic but have drifted away.

Will this work? Think of it as the Democrats' own faith-based initiative.

And a few words of caution. First, as Ruth Marcus points out, the top three candidates all happen to be people for whom faith is real. The voters will detect a fake, and candidates cannot assume that they can (or should) fake a commitment to faith.

Second, all politicians of faith, whether right, left or center, need to remind themselves that salvation comes through Christ, not politics. A hit of humility is essential. We should aim to save the world, but understand that we won't.

Finally, a theocracy of the left is no better than a theocracy of the right. Democrats of faith need to always remember that we live in a pluralistic society and respects voters of all faiths--including those with no faith at all.
Evangelicals Politics

Anonymous said…
I think all of this is over analyzing how faith will impact voters who are not single issue voters on issues like choice or gay marriage.

So when a candidate is sincere in his expressions of faith, he is comfortable in his faith, he is more convincing.

Democrats for too long talked programmatically and did not found that on their faith. It became political gibberish. When I talk about health care for the poor because it is my moral responsibility to care for the poor, it is a much more powerful and believable message.

I don't disagree. I think that much of the analysis that focuses on the "religious left" vote (or the lack therefof misses the point. Many moderate religious voters will be attracted to a Democrat who can put views on issues in a faith or values framework,
June 6, 2007 at 10:28 AM