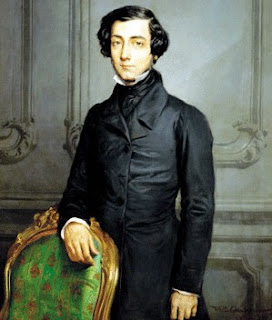 Mark Lilla, professor in the Committee on Social Thought at the University of Chicago, has a review of a new biography of Alexis de Tocqueville, in The New Republic. The review is quite critical of the biography, but I was more taken with Lilla's brief description of the development of democratic multiculturalism in the United States. In short, Lilla argues that the United States developed democratic multiculturalism better than other countries because it was paradoxically initially quite homogeneous. We had to learn toleration and equality first within this homogeneous community before we could extend it to individuals from other groups:

Tocqueville was neither a racist nor a chauvinist; Brogan tells us that he broke with his trusted aide Gobineau when the latter began publishing his bizarre theories about racial inequality. But Tocqueville did believe that every civilization begins at what he called a point de départ, out of which its prejudices, habits, and characteristic passions grow. The American point de départ was ethnic-religious: our country was first populated by Puritans, who shared what we today call a common culture, and whose theology wed the spirit of religion to the spirit of liberty. Whether or not Tocqueville was right about Puritanism, the deeper insight concerns the social preconditions of democratic life.

Tocqueville attributed no superior racial characteristics to the Anglo-Saxons (he was French, after all), but he did notice that the potential for toleration implicit in Protestantism could be realized only in a context in which people looked roughly similar, spoke the same language, and cooked the same food--in short, where equality was already a social and psychological fact. Many societies in the past practiced toleration without assuming equality: every group got its own quarter of the city, paid its taxes, and (ideally at least) was left alone. This was multiculturalism, but it was not democratic multiculturalism, which tolerates individuals as individuals. Paradoxically, ethnic and confessional homogeneity may be the historical precondition of democratic multiculturalism, which can later dissolve that homogeneity. Only once the principle of toleration exists as a social fact among similar people can it be conceived as an abstract principle and extended to others.

Of course, this type of democratic multiculturalism is always in danger of reverting back to the group model. At some point, separation into different groups can lead to the type of multiculturalism that is group, rather than individual, focused. Nonetheless, I am fascinated by Lilla's point--did we first need to learn toleration and equality within a homogeneous group?
History Social Trends