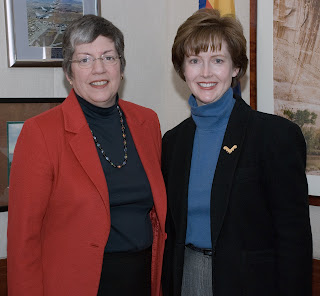 Before my wife (the one on the right in the photo) decided to stay home to care for our toddler, she worked in the office of Arizona Governor Janet Napolitano (the one on the left of the photo) on a wide variety of issues. One of the issues that she grew quite passionate about was the forgotten children of incarcerated parents. Despite the fact that these children are greatly at risk of becoming incarcerated themselves, they are largely forgotten by everyone. My wife worked hard to develop a wide variety of interventions--including expansion of mentoring programs. And she worked hard to make sure policymakers took these children into account when they made decisions. (Note to legislators: moving prisons hundreds or thousands of miles away from families is very, very bad for the children of those incarcerated in these prisons, and that, in turn, is bad for future victims of crime).

I was therefore pleased to see in Episcopal Life Online that several Episcopal dioceses have taken on the challenge, and are paying to send these children to camp:

Children of parents in prison "are invisible. No government entity is responsible for them," says a U.S. Senate report.

The president says there are 1.5 million of them. The Bureau of Justice statistics say they have a 70 percent chance of going to prison just like their parents.

In the hope of doing something about that, dioceses all over the country are sending the littlest victims of crime to summer camp for a week of love, learning and fun.

"If we can give them a week of unconditional love, there is hope," says the now-retired director of prison ministry for the national church, the Rev. Jackie Means.

Before she retired, she started another camp in the Diocese of Southwest Florida. Now there are camps in 20 dioceses of the Episcopal Church.

These children bring to camp "anger, fear, insecurity, suspicion and shame," said Means. "They need to know that Jesus loves them as they are. They need a safe place to deal with hard stuff and to be shown respect."

"To our utter amazement, attitudes and behaviors do get altered in that brief time," wrote the Rev. Stephen R. Caldwell. He started the first of these Episcopal camps in Sante Fe, New Mexico. "Campers are surprised to discover that our love for them is unconditional."

Gay Yerger, a staffer at Mississippi's ecumenical Camp Caritas, said: "They sing songs, they beat drums, they dance, they cut and paste and draw, they write, they imagine, they listen and they speak. They run and they rest ... In a safe and loving environment, children discover self-worth, broaden their horizons, make positive choices and develop leadership skills ... Children and adults are transformed."

A few of the children who attended a camp in Oklahoma for children 8-12 were getting into trouble once they turned 13, said Deacon Judy Gann. So a second -- Camp Start -- was created for children 12-15.


Kudos to these dioceses. The Diocese of Arizona should look to do the same.
Social Trends

Anonymous said…
Thank you for noticing my story. The thanks should go to the Rev. Jackie Means, now retired as criminal justice officer of the EC, and associate rector at St.Hilary'sin Fort Myer FL. She flew all over the country igniting sparks of interest in these camps...how in 21 dioceses.

They are not easy -- we found here in Maryland that the children tend to teach each other gang signs -- but maybe they saw rays of hope.
November 8, 2007 at 9:06 AM

Anonymous said…
What a wonderful ministry. As a judge, I have not found many books for these kids and decided to write one myself call "A Boy Named Rocky: A Coloring Book for the Children of Incarcerated Parents". It is a great tool for counselors, kids and parents and can be found at www.4theloveofkids.com
May 8, 2008 at 7:19 AM