Its Official: The New York Times Says Phoenix is Doomed, or Perhaps Domed 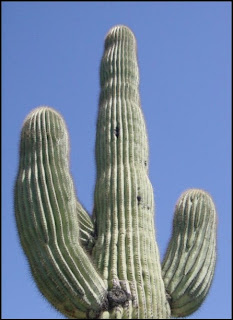 Timothy Egan, a guest columist for the New York Times thinks that climate change means that my home town of Phoenix is doomed. Yes, yes, I realize that this is the reaction of everyone who experiences his or her first day with a high above 110, but I think Mr. Egan may have a point. Here is what he has to say in an op-ed entitled "the First Domed City":

Every week, more than 2,000 people move to the Valley of Sun, to a metro area nearly as big in size as the state of New Jersey. They come from Pittsburgh, from Buffalo, from Cleveland, from Fargo — from yesterday to tomorrow.

A city equal to Rochester plants itself here every two years. And what they find is a compelling urban experiment: nearly four million people trying to live in the Sonoran Desert, and live with what they had at home — golf courses, lakes, perennial green. But they also learn that summer is winter, in the sense that Phoenicians stay indoors this time of year, hunkered inside a climate-controlled world, and plan their extended midday excursions like an astronaut going for a space walk. In the stillness of late-afternoon, you wonder: where is everybody?

Phoenix, even more than the other desert metropolis of Las Vegas, is the new American city. People come here because nobody has a past, and because houses are still cheap and because when the snow reached the roofline they finally said: That’s it! I’ve had it.

But what if this place — so new the Bubble Wrap is barely off the red-tiled roofs of neighborhoods named for whatever they displaced — became uninhabitable? What if the climate models that predict the American West heating up faster than any other part of the country proved all too accurate?

If you live here, you know what it means when the sun becomes an enemy. On Thursday, it was 110 degrees. Yesterday, same thing. Too hot to leave a dog or a child in a car without risking their lives. Your skin stings. You feel your brain swelling while waiting for the air-conditioning when you get in the oven of a parked car.

Is there a similar point at which the city becomes imperiled? The skeptics say: No, we can engineer our way around it. Look at the ballpark where the Diamondbacks play baseball: It has a retractable roof, which is closed while the stadium is cooled by industrial-strength air-conditioning and then opened in the evening.

Or behold the great veins of the Central Arizona Project, bringing water from the Colorado River to fountains in Scottsdale. The fast-evaporating water courses through the city as it bakes, making it livable.

To their credit, residents are using less water, deploying the sun to power air-conditioning, putting in desert landscaping — cacti and stones, not bluegrass and ponds. I do not doubt that innovation will continue to make it easier to defy the heat. But it’s one thing to bring runoff from the Rocky Mountains to the desert floor. It’s another to bring alpine air to streets and parks and backyards, unless you put a dome over the whole city.

Wallace Stegner always said it was his hope that the West could build cities to match the setting. He never predicted that the setting would be the problem.

Read it all (sadly, subscription required).

Anonymous said…
Like you this is my first Phoenician summer here and I am consciously working on acclimating myself to the hotter environment. I haven't been using the AC in the car until it got over 95 and only if it was not a really short trip. Also keeping the AC in the house set around 83 or 84 (my husband does like it cooler at night so it goes down to 82 then.) So this morning I joined some longer term residents at a cafe and remarked "hey, it's kind of cold in here" and everyone said they liked it.

+Nicholas said…
I’m with you Alice. This is my first summer in Phoenix as well. It’s hot, but not nearly as bad as the author of the article makes it out to be.

When I’ve asked folks here about the summers, they say the worst part is that it goes on for three months with out much relief. But I felt the same way about the cold back east, so it’s really just a matter of swapping out when season for another.

I do want to add one bit of information I’ve stumbled across regarding Global Warming however. I’ve read that the Monsoon season here fires up as soon as the Gulf of Baja reaches a particular water temperature. And once that does, there’s regular rain here in the Valley until the water temp drops back down again.

If that’s true, then the hotter it gets, the more water Phoenix receives. And the cooler it becomes locally.