United Methodists and Teachers on Evolution in the Classroom

May 20, 2008
Two unrelated stories worth noting. First, the United Methodist Church has adopted a resolution rejecting the teaching of creationism and "Intelligent Design" as science:

The United Methodist Church passed a resolution at its recent General Conference opposing the teaching of Creation Science and Intelligent Design in public schools.

The statement, passed during a 10-day conference in Fort Worth, Texas, that ended May 2, put the denomination on record "as opposing the introduction of any faith-based theories such as Creationism or Intelligent Design into the science curriculum of our public schools."

"Creationism and Intelligent Design are appropriate topics in public education classes such as comparative religion, literature, or philosophy since scientific method incorporates critical thinking processes," said the resolution adopted by a vote of 508 to 323. "All truth is God’s truth. The promotion of religion or any particular religion in the public schools is contrary to the First Amendment.

Good for them. Read it all here in Ethics Daily. Hat tip to Jim West.

Second, a recent poll discloses that 25% of all science teachers ateach creationism and intelligent design in their classrooms:

One in eight U.S. high school teachers presents creationism as a valid alternative to evolution, says a poll published in the Public Library of Science Biology.

Of more than 900 teachers who responded to a poll conducted by Penn State University political scientist Michael Berkman and colleagues, 32 percent agreed that creationism and intelligent design should be taught as scientifically unsound. Forty percent said such explanations are religiously valid but inappropriate for science class.

However, 25 percent said they devoted classroom time to creationism or intelligent design. Of these, about one-half -- 12 percent of all teachers -- called creationism a "valid scientific alternative to Darwinian explanations for the origin of species," and the same number said that "many reputable scientists view these as valid alternatives to Darwinian theory." (The full study makes for interesting reading: Evolution and Creationism in America’s Classrooms: A National Portrait.

Read it all here. As you might expect, PZ Myers is deeply concerned. An interesting chart of views on evolution by science teacher was in the study--science teachers are less supportive of creationsim than the general public, but there is still a large number of teachers who are creationists. 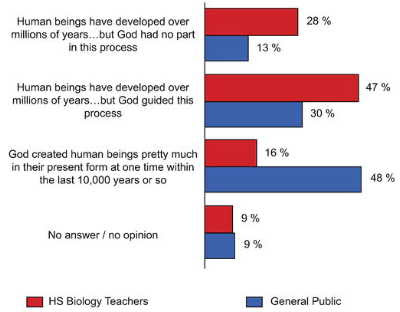 A related aside: I just finished reading Founding Faith by Steven Waldman (which I highly recommend). One of the themes of the book is how evangelicals were the most active proponents of the separation of church and state--even at the state level. Indeed, in Virginia, Baptists and other evangelicals lead the successful fight to defeat a proposal that would have given them access to public money. The UMC resolution falls squarely in this tradition.
Evolution Science

Anonymous said…
If the United Methodists want only legitimate science taught in science classes, then they should insist that evolution not be taught. Evolution is philosophy, not science.
May 20, 2008 at 4:19 PM