Ian McEwan on the Day of Judgment 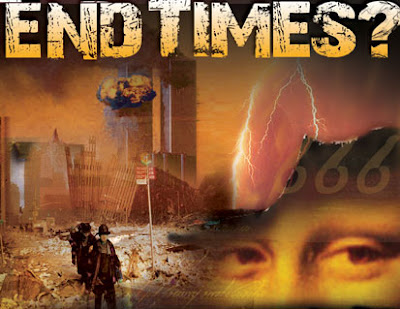 Ian McEwan has a fascinating two part series in the Guardian on "end time thinking." Part one is here, and part two is here.

Here are some interesting points:

First, McEwan notes that "end time" thinking is quite pronounced in the United States:

Five centuries later, the United States, responsible for more than four-fifths of the world's scientific research and still a land of plenty, can show the world an abundance of opinion polls concerning its religious convictions. The litany will be familiar. Ninety per cent of Americans say they have never doubted the existence of God and are certain they will be called to answer for their sins. Fifty-three per cent are creationists who believe that the cosmos is 6,000 years old, 44 per cent are sure that Jesus will return to judge the living and the dead within the next 50 years. Only 12 per cent believe that life on earth has evolved through natural selection without the intervention of supernatural agency.

In general, belief in end-time biblical prophecy, in a world purified by catastrophe and then redeemed and made entirely Christian and free of conflict by the return of Jesus in our lifetime, is stronger in the United States than anywhere on the planet and extends from marginal, ill-educated, economically deprived groups, to college-educated people in the millions, through to governing elites, to the very summits of power. The social scientist JW Nelson notes that apocalyptic ideas "are as American as the hot dog". Wojcik reminds us of the ripple of anxiety that ran round the world in April 1984 when President Reagan expressed that he was greatly interested in the biblical prophecy of imminent Armageddon.

Second, our fascination with Armageddon is quite human--it is one of the easiest ways to give our life meaning:

We are born, as we will die, in the middle of things, in the "middest". To make sense of our span, we need what he calls "fictive concords with origins and ends. 'The End', in the grand sense, as we imagine it, will reflect our irreducibly intermediary expectations." What could grant us more meaning against the abyss of time than to identify our own personal demise with the purifying annihilation of all that is. Kermode quotes with approval from Wallace Stevens - "the imagination is always at the end of an era". Even our notions of decadence contain the hopes of renewal; the religious minded, as well as the most secular, looked on the transition to the year 2000 as inescapably significant, even if all the atheists did was to party a little harder. It was inevitably a transition, the passing of an old age into the new - and who is to say now that Osama bin Laden did not disappoint, whether we mourned at the dawn of the new millennium with the bereaved among the ruins of lower Manhattan, or danced for joy, as some did, in the Gaza Strip.

Third, this obsession with the "end times" need not be religious--there are secular versions as well:

We should add to the mix more recent secular apocalyptic beliefs - the certainty that the world is inevitably doomed through nuclear exchange, viral epidemics, meteorites, population growth or environmental degradation. Where these calamities are posed as mere possibilities in an open-ended future that might be headed off by wise human agency, we cannot consider them as apocalyptic. They are minatory, they are calls to action. But when they are presented as unavoidable outcomes driven by ineluctable forces of history or innate human failings, they share much with their religious counterparts - though they lack the demonising, cleansing, redemptive aspects, and are without the kind of supervision of a supernatural entity that might give benign meaning and purpose to a mass extinction. Clearly, fatalism is common to both camps, and both, reasonably enough, are much concerned with a nuclear holocaust, which to the prophetic believers illuminates in retrospect biblical passages that once seemed obscure.

Finally, McEwan warns that all the various types of "end times" thinking appear to be on the rise, and the resulting fatalism is quite dangerous indeed:

Thirty years ago, we might have been able to convince ourselves that contemporary religious apocalyptic thought was a harmless remnant of a more credulous, superstitious, pre-scientific age, now safely behind us. But today prophecy belief, particularly within the Christian and Islamic traditions, is a force in our contemporary history, a medieval engine driving our modern moral, geopolitical, and military concerns. The various jealous sky-gods - and they are certainly not one and the same god - who in the past directly addressed Abraham, Paul, or Mohammed, among others, now indirectly address us through the daily television news. These different gods have wound themselves inextricably around our politics and our political differences.

Periods of uncertainty in human history, of rapid, bewildering change, and of social unrest appear to give these old stories greater weight. It does not need a novelist to tell you that where a narrative has a beginning, it needs an end. Where there is a creation myth, there must be a final chapter. Where a god makes the world, it remains in his power to unmake it. When human weakness or wickedness is apparent, there will be guilty fantasies of supernatural retribution. When people are profoundly frustrated, either materially or spiritually, there will be dreams of the perfect society where all conflicts are resolved, and all needs are met.

That much we can understand or politely pretend to understand. But the problem of fatalism remains. In a nuclear age, and in an age of serious environmental degradation, apocalyptic belief creates a serious second order danger. The precarious logic of self-interest that saw us through the cold war would collapse if the leaders of one nuclear state came to welcome, or ceased to fear, mass death. The words of Ayatollah Khomeini are quoted approvingly in an Iranian 11th grade textbook: "Either we shake one another's hands in joy at the victory of Islam in the world, or all of us will turn to eternal life and martyrdom. In both cases, victory and success are ours."

And if we let global temperatures continue to rise because we give room to the faction that believes it is God's will, then we are truly - and literally - sunk.

If I were a believer, I think I would prefer to be in Jesus's camp - he is reported by Matthew to have said, "No one knows about that day or hour, not even the angels in heaven, nor the Son, but only the Father."

Have we really reached a stage in public affairs when it really is no longer too obvious to say that all the evidence of the past and all the promptings of our precious rationality suggest that our future is not fixed? We have no reason to believe that there are dates inscribed in heaven or hell. We may yet destroy ourselves; we might scrape through. Confronting that uncertainty is the obligation of our maturity and our only spur to wise action. The believers should know in their hearts by now that, even if they are right and there actually is a benign and watchful personal God, he is, as all the daily tragedies, all the dead children attest, a reluctant intervener. The rest of us, in the absence of any evidence to the contrary, know that it is highly improbable that there is anyone up there at all. Either way, in this case it hardly matters who is wrong - there will be no one to save us but ourselves.

Read all of the two essays here, and here.

Anonymous said…
"there will be no one to save us but ourselves."

Anonymous said…
I think one thing McEwan misses is the historical contingency of apocalypic visions. They are rarely about the future, and more about the promulgation of present anxieties into the future. Interesting post-modern take on Revelation is "Apocalypse of Jude" - www.aofj.info - a fiction that mixes Jude, Revelation with T.S. Eliot's Wasteland.
June 1, 2008 at 1:53 PM