The Politics of Climate Change

August 21, 2007
American Environics has issued a report on attitudes toward energy and climate change(PDF) The good news is that the American public agrees that there is a problem, but the bad news is that they have more important issues in mind--with gay marriage and abortion leading the list. Michael Yglesias has some good analysis: 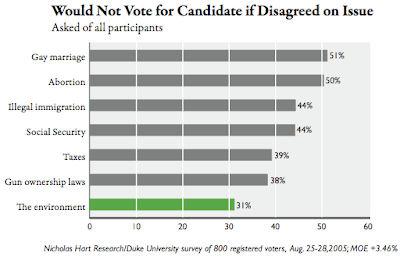 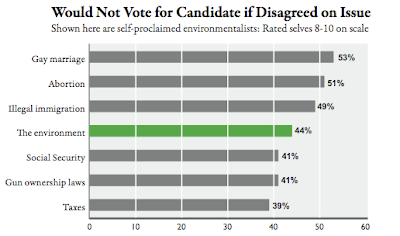 Even people who rate themselves 8s, 9s, or 10s on a scale of "are you an environmentalist" have these other issues that rate higher as redlines. The upshot of this and other data, according to the report, is that while there's public eagerness to do something about global warming, it's very tenuous, and people are rabidly opposed to anything that would increase energy costs. Since this is public opinion research, they go on to discuss a lot of ways to try to navigate that terrain, but it's hard for me to imagine any way to seriously curb carbon emissions that doesn't involve some increase in energy costs. It'd be nice, of course, if renewables just suddenly became cheaper than coal and gasoline, but then there's hardly be need for any policy.

Mark said…
That's the usual problem.. Yes, there is a big problem. Yes, somebody ELSE should do something about it..