August 16, 2007
I have written previously about my perspective on torture as the former General Counsel of the Army. (For those who don't want to read my previous posts, I am very much against it.) I was therefore fascinated by an article in Harpers that describes a sermon against torture by John Donne in 1625:

Recently I asked a clerical friend whether, considering the persistence of torture as a moral issue, he had thought of giving a sermon on the subject? He looked very uncomfortable and responded saying that his congregation was bipartisan and that he would be loathe to introduce a political issue as a sermon topic. It would fragment the congregation, he thought. Really?

I reject the notion that torture is a political issue of any sort. It is a great moral issue. And when those who have a clerical vocation fail to understand it and address it in those terms, they do their flock and themselves a great disservice.

Consider this John Donne sermon of 1625. It was delivered as his Easter Sunday sermon, which is important. Then as now, the Easter service drew the biggest crowd of the year. The Easter sermon was the minister’s minute in the spotlight—the moment when he would reach his greatest audience and make his reputation. And we know from John Donne’s correspondence, he was concerned about another audience: the king, his entourage and the courts. When Donne rose to deliver this sermon, torture was a heated “political” issue in England. Under the Stuart monarchs, the use of torture was viewed as a royal prerogative (how little things change). It was administered by judges, particularly by the national security court of seventeenth century England, the so-called Court of Star Chamber. John H. Langbein’s important book, Torture and the Law of Proof gives us very clear guidance into how torture was prescribed and used.

Over a series of centuries, the genius of the English law had been steadily to restrict and limit the use of torture, until at this point, under King James, it was controlled by the king’s judges and limited in practice through a series of special writs. Which is to say, legally it was far more constrained than it is today under an Executive Order issued by King James’s understudy in allegedly Divine Right governance, George W. Bush.

Donne delivered a direct blow against this system, the use to which it was put, and the suffering it caused. He makes no equivocations. And in the end he delivers his blows against even the king’s judges who administer the system. No one viewed Donne as a “political figure.” Indeed, owing to his Catholic background and sympathies, he eschewed court politics. Nor in the end was there anything “political” about the question of torture—it was an issue of ethics and of faith.

Read it all here.
Torture

bls said…
Good post - thanks for calling attention to this, and for the link.

It's amazing, actually, that we (meaning, the public generally, and philosophers and theologians in particular) hardly talk about things like this anymore. Scary, actually.
August 17, 2007 at 1:33 PM 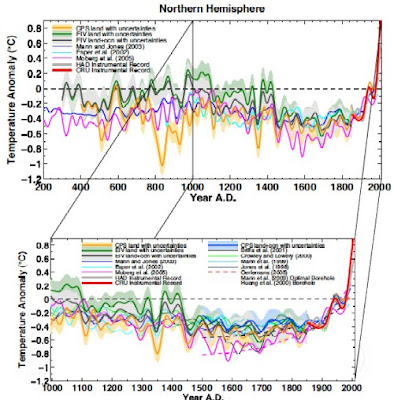 The so-called "hockey stick" chart--which shows a rapid rise in global temperature is a mainstay in arguments that humans are causing climate change--a center of attacks by climate change denialists. A new study offers a revised chart that conforms the hockey stick chart. Climat Feedback explains the development:

The contentious ‘hockey stick’ climate change graph has again been upheld as broadly accurate, doubtless to the rage of climate denialists/sceptics/whatevers.

A team led by Michael Mann of Penn State University has looked at a whole range of proxies for surface temperatures over the last 2,000 years in an attempt to counter criticism of the graph, which showed a long ‘handle’ and a sharp upturn (the blade).
Their findings? As the Christian Science Monitor puts it: “It still looks a lot like the much-battered, but still rink-ready stick of 1998. Today the handle reaches further back and it’s a bit more gnarly. But the blade at the business end tells the same story.