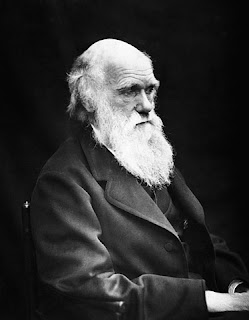 USA Today has an interesting article about a recent article by cultural historian Mark Graham of Grove City (Pa.) College in the Journal of Religious History , which counters the view that Charles Darwin was hostile to Christianity. To the contrary, he supported missionary work his entire life, although he died an agnostic:

More than a century after his death, people are still trying to understand Charles Darwin. And a new report says those who label him anti-religion are wrong. The 19th Century English biologist famous for his theory of evolution supported Christian missionary work his entire adult life, reports a cultural historian.

"The march of improvement, consequent on the introduction of Christianity, through the South Seas, probably stands by itself on the records of the world," Darwin wrote in 1836, chronicling the sea voyage that opened his eyes to the development of species.

. . .Attacks against Darwin's supposed heretical ways flared brightly at the 1925 Scopes trial over a Tennessee law that forbade teaching "that man has descended from a lower order of animals." At the trial, politician William Jennings Bryan called evolution a threat to religion. More recently, biologist Richard Dawkins of England's Oxford University wrote in his 1986 book The Blind Watchmaker that "Darwin made it possible to be an intellectually fulfilled atheist."

Attackers and defenders of Darwin today may be surprised, Graham says, to learn that Darwin's first publication, coming after his 1831 to 1836 worldwide voyage on the H.M.S. Beagle that set him on the path towards describing natural selection, was a defense of missionary work in the Pacific.

Darwin was moved by missionary efforts to help people in Tahiti and New Zealand, Graham concludes. "What's interesting is that it shows Darwin was a man who could change his mind after looking into something," he says.

"It's a mistake to say that missionary work was a primary purpose of the Beagle voyage," says historian John van Wyhe of the University of Cambridge's Complete Work of Charles Darwin Online. Missionary work was not part of the Beagle's charter — Darwin's role was to collect samples of exotic species — but the ship's captain, Robert FitzRoy, was a supporter who wanted to take a missionary to South America on the voyage.

Critics of Darwin often overlook his initial plans to become a vicar and his support for missionaries is well-known to historians, van Wyhe says, but is not seen as a major part of his life.

Darwin never was hostile to religion, even though he died an agnostic, Graham adds. His wife and children attended church without his objections, and he was "a rather nice, timid gentleman living a quiet life," Graham says.

Read it all here.
Evolution History