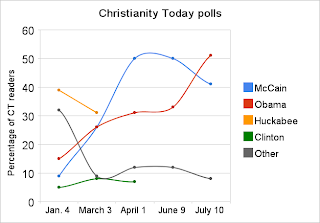 Christianity Today is the leading publication for evangelicals in America. Despite my anglo-Catholic leanings, I am a big fan and avid reader. As perhaps an indication of the appeal of Obama to many evangelicals, the Christianity Today political blog is reporting that its readers are suppporting Obama over McCain in their online poll. Now this poll is hardly scientific,and a scientific poll of Christianity Today's readers would likley reach a different result. Still, do you think Kerry ever did as well on this poll?

Here is what the blog has to say:

Christianity Today online readers showed more support for Sen. Barack Obama than Sen. John McCain in our poll this week for the first time since January.

Obama passed McCain (41%) by garnering 51 percent of the vote during our poll that closed yesterday. In June, McCain led Obama 50 to 33 percent. The two were tied in March at 26 percent.

Read it all here.
Evangelicals Politics